Periodically through the history of farming in the South San Joaquin Valley, there have arisen challenges or crises in which water demands exceed supply. Repeatedly, our forebearers have risen to the challenge and developed creative new solutions that could not be envisioned at the time and we continue seeking to fulfill our vision of being a collaborative leader in developing uninterrupted, affordable, quality water for generations within Arvin-Edison Water Storage District.

Before the District was Formed.

1930s. Drought and the Search for Solutions 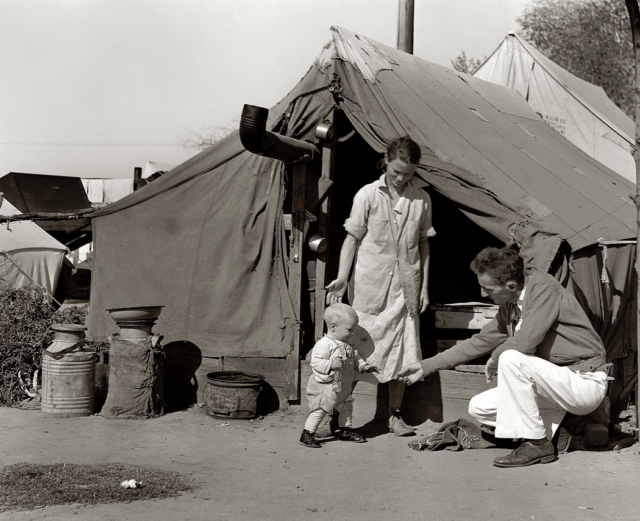 It is easy to imagine farmers in Arvin in 1936 passing by this migrant camp being filled with anxiety for the future. Much of the midwest had been overcome by drought, sending floods of migrants into California, and a major encampment had been formed in Arvin. But there was also the more direct threat from a massive drought that greatly depleted the Central Valley's groundwater, causing a steep drop in the water table and putting 20,000 acres out of crop production. Farmers realized this was not sustainable and began searching for solutions.

Following the epic 1930s-era drought, Friant dam was built by the 1940s, along with CVP canals and the problem of water supplies appeared solved.

In 1962, the District entered into a water supply contract with the United States Bureau of Reclamation (USBR) to supply water for the District’s project from the Friant-Kern System of the Federal Central Valley Project (CVP). The water supply contract provides for the annual delivery of 40,000 acre-feet of Class 1 (firm) water and up to 311,675 acre-feet of Class 2 (non-firm) water.  This contract began in 1966. Also in 1966, AEWSD was granted a $45 million Federal Loan (now fully repaid) for Construction of an Irrigation Distribution System, has been fully repaid.

It was renewed in 2001 for a term through 2026, with provisions for renewal after that.  The CVP supplies are utilized directly by the District and to effect water transfers and exchanges

Other Contracts with the US Bureau of Reclamation

In the past, AEWSD has operated as Contractor of Project Water from the Friant Division of the CVP with the BOR per the following contracts:

Construction of Key Facilities Began in 1964. Construction of the District’s main facilities was initiated in 1964 and completed in 1968, reflects the implementation of a plan for the integrated management of a supplemental imported surface water supply with existing groundwater reserves providing a true conjunctive use program.

By the 1960s shortages were again limiting and threatening farming, and AEWSD embarked on a multi-decade period of creative water management that included: water banking, exchanges, trades and other agreements that provided a solid and stable water supply.

A notable major event occurred in 1997 with the 25 Year Agreement with MWD providing a model for large scale, mutually beneficial agreements with parties outside the Valley. In  order to accomplish this program, nearly $25 million in new facilities were build, including: 550 acres of new spreading, 15 new groundwater wells, and 4½ mile, bi-directional Intertie pipeline connecting the terminus of the District’s south canal with the California Aqueduct,

The drought and current supply, political, regulatory and legal loses demonstrate that we don’t have enough water long-term, we will continue to lose more, and it is not coming back by itself. Most dramatically, Friant water deliveries were cut to zero for two years running in 2012-13 due to drought and an extreme misinterpretation of the Exchange Contract. Also in recent years, numerous other water supply threats emerged, due to the San Joaquin River Restoration, environmental and regulatory cutbacks in the Delta, increased competition statewide for limited water supplies, etc.

AEWSD has a history of exceptional water management and it has maintained groundwater conditions in its area despite the overdraft across much of the Valley. A core advantage for AEWSD is its long history and experience with banking and exchange agreements, and its geographical location with respect to conveyance facilities. The District will need new investments and new creativity, but it has already developed the core capabilities, relationship, experience with substantial investments in canals, recharge basins, pump stations, and other facilities it can build upon. 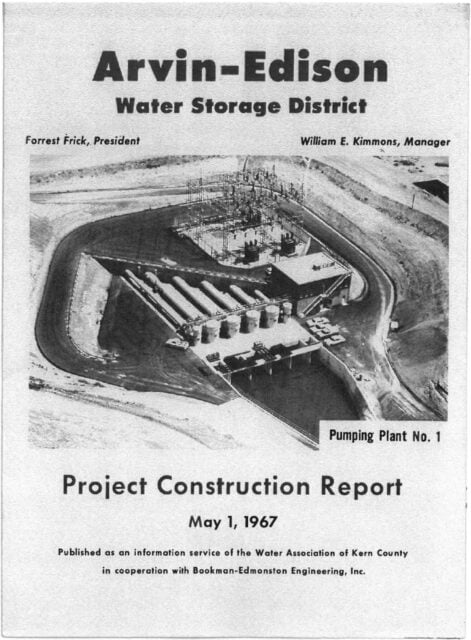 Cover of the five page summary developed in 1967 upon completion of the main conveyance facilities of Arvin Water Storage Storage District.